I have a blazer.

It is one of few things I own that I’d run into a burning house to rescue.

It is a fashion piece, but for me it is strongly associated with the passings of two people:  one from 5 years ago, and one from 5 days ago.

I have this cherished clothing item only because of my old friend Pam, who died in 2014 and who

m I’ve written about on this blog.  On a mid-1990s visit to Paris, where Pam had already been living for about 10 years at that point, she “owned” La Ville-Lumière in her own special way — party crashing, museum sneaking-into, and being all-around in-the-know about the things most of us don’t have the energy, let alone brain space, for. 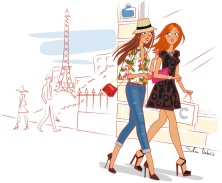 hen you visited Pam, you pretty much tagged along with whatever adventure she had brewing. One particular afternoon, the adventure included going to a Chanel sample sale. Then and now, the thought never entered my mind that even at sample sale prices I’d be able to touch anything with a Chanel label, but again, I was tagging along.

We went.  I was a little surprised, I recall, that the room was nearly empty. There were one or two other women there to shop, plus one or two employees who were tending the sale.  Sifting through the racks, I managed to find the only item that seemed really accessible to me (“accessible” = price + lifestyle appropriateness; I am not and never was in the habit of attending functions that require me to look “expensive,” fortunately!):  It was this blazer, with the boldface “Karl Lagerfeld” emblazoned on the label.

So Pam and I ended up with these matching Karl Lagerfeld blazers. Not haute couture; 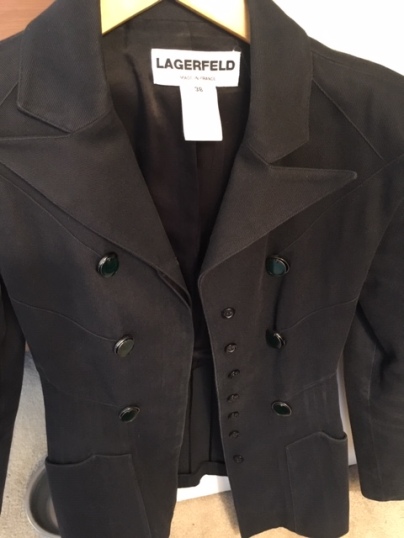 but literally off the rack, prêt-à-porter.  It is beautiful without looking ostentatious. Its fabric is a thick denim-like cotton, black, with perfectly tailored seams and edges and lines. The inside lining is silk. It has six dark-green glass buttons, each set inside a ring. There is movement to it. The actual button closures are much smaller standard black buttons, and the button holes are covered, tucked inside.

Did I know who Karl Lagerfeld was? I don’t remember, but if I didn’t before, I certainly did after. And while I never bought another Lagerfeld or Chanel piece to date, this one became one of my most prized possessions.

It is emotional stock whose value has increased with time, and with the passing of each of the two people I most closely associate it with.

Without knowing, I knew its value every time I wore it, every time I held it close to my body, or placed a ticket stub or a handwritten note on a scrap of paper inside its deep, wide pockets.

When news of the death of Mr. Lagerfeld hit the presses last week, I realized it never was

about the blazer, the jacket, the fashion.

It is, and always was, about the moment, and about the people who brought that moment to life.

They did then and still do, even now.

"For my part, I travel not to go anywhere, but to go.”
View all posts by Traveler →
This entry was posted in Europe, Paris, Personal and tagged travel. Bookmark the permalink.