The best way to see a country is from the footplate of a locomotive. 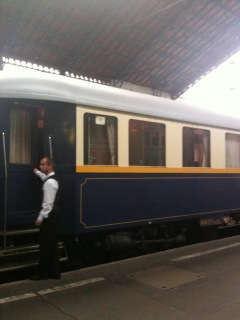 Aside from a longstanding desire to visit Transylvania, the driving force of my eastern European itinerary was an almost-as-longstanding desire to take a ride on a luxury train (generally), the Orient Express (specifically).  After researching many options, I had come across an even more suitable choice:  the Danube Express — ideal because it incorporated a visit to Transylvania in the course of crossing four countries.  Pretty much a no-brainer!

I was far from riding the footplate, and the Danube Express is so much more than a “locomotive.”  In the star quality system, it has to be somewhere near top of the line.  The Danube Express offers multiple journeys a year through various destinations.  I first discovered it in 2008.  I had originally planned to take this particular journey in 2009, but the journey (aptly titled “The Transylvanian”) was canceled that year, apparently to the down economy, so I put off the trip off for another year.  It was worth the wait. 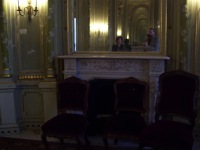 Everything about this experience was an Experience with a capital E.  From the moment we, the Danube Express guests, arrived to Budapest’s Nyugati station, all the way through to disembarking in Istanbul’s Sirkeci station, it was a transporting experience in more ways than (the obvious) one.  As soon as I arrived (late) to Nyugati station (built by the Eiffel company), I was met by an attendant who took the luggage and led me to an elegant room in the terminal where Iwas given a champagne reception, along with all of the other guests.  Shortly thereafter, I boarded the train and was given a key to the sleeping compartment.  The anticipation of walking down the narrow hallway toward this compartment, not knowing what to expect, felt like something akin to a child’s first Christmas morning. 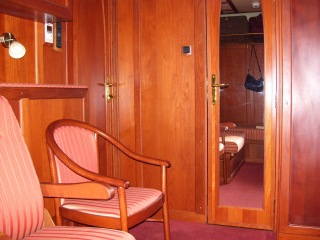 When I got to the compartment, it was like seeing the tree with presents under it.  It was miniature.  It had L-shaped sofas which would later become the bed.  It was outfitted with a sitting area, side tables built into the sofas, cabinetry, a luggage shelf, and a full bath with shower stall.  Windows that opened and closed securely and easily.  All this in less than about 50 square feet of space.  It was perfect.

And that was just the compartment!  The lounge car was equipped with a piano (and player), full bar service that was open 24 hours, and snacks.  The restaurant cars offered three fine meals a day. 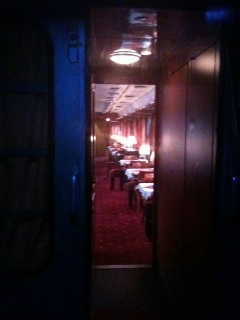 Each day started with a continental breakfast before arriving to the first tour spot of the day.  After disembarking for a few hours to explore, I returned to the train for lunch and traveled to the next spot for more touring and exploration, eventually to return to the car for dinner and the night ride on to the border crossing into the next country.  Guests were asked to leave our passports with the attendants overnight with the caveat that we may be asked to rise during the night if the border crossing required it.  Hungary into Romania and Romania into Bulgaria did not.

Bulgaria into Turkey required visas, so — while no trouble ensued — it merits a separate entry in this blog.

Night 1 on the train, traveling into Romania, anticipating the next-day visits to long-awaited sites, I barely slept at the thought of making way, at long last, into the old haunts of the Draculesti.

Perhaps I caught a few winks, but for those few hours, the night remained rich with the lore of Romania’s famous historical hero and literature’s infamous anti-hero.

“Railway termini are our gates to the glorious and the unknown.  Through them we pass out into adventure and sunshine, to them, alas! we return.” (E.M. Forster)

"For my part, I travel not to go anywhere, but to go.”
View all posts by Traveler →
This entry was posted in Eastern Europe, September 2010, The Train. Bookmark the permalink.