A funny thing happened on the way from the Forum

And here’s what it was:

Sheila E. ushered in the first of five encore performances by Prince (yes, the Purple One — THAT Prince) by singing “Glamorous Life.”  In L.A. a week ago for non-Prince reasons, My travel partner and I caught the first of a 21-night run of performances that were (and still are, as of this writing) to take place at the Los Angeles Forum, in Inglewood, California.

After the first 2 or 2.5 hours, stage lights down, house lights up, we, along with thousands of others, left The Forum fully sated and uniformly blown away.

After about 15 minutes of wandering through the vast parking lot seeking our rental, scanning hundreds of identical-looki 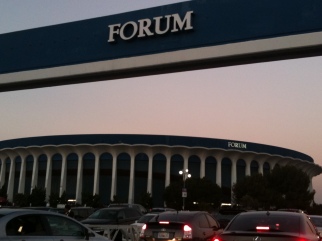 ng vehicles for the only distinguishing feature we could recall — a Nevada plate, which just happens to have been what was on the vehicle selected for us at the car rental agency at LAX — we assumed we’d have to wait ’til most had filed out of the venue.  We are in different areas of the parking lot, yet still visible to one another.  When I noticed my friend walking toward me, I ask, “You find it?”

“Sheila E.’s singing Glamorous Life.  How will I get back in?”

So he runs on ahead, gets back in, I follow.  I stand at the back of the auditorium, as Prince goes on to perform lesser-known songs, as well as even more of the well-known ones from his seemingly infinite repertoire, for still another hour.  Eventually, we are back out in the lot, in the same circumstance we had left an hour prior.  I suggest that we cover different territory, so as to avoid searching the same ground.  He gladly moves on to look somewhere else, somewhere I’m not.

“The sky was all purple, there were people running everywhere.”

Well, the sky outside wasn’t purple, though earlier in

the evening, the sky INSIDE was.  Nevertheless, now, at 12:45 a.m., concertgoers are milling about the parking lot successfully finding their own cars while we continue aimlessly seeking our Nevada-plated rental.

While tiredly looking at license plates for something other than the familiar California script, I simultaneously observe t-shirt salesmen advertising their authentic-looking and unauthorized shirts, tempted to buy one, just as a couple of policemen intercept a sale-in-progress and confiscate the inventory.

Not long after th 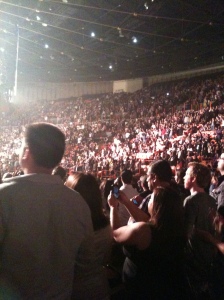 e mini-drama to rescue the consumer market from unofficial concert t-shirt sales, I see my friend about 30 feet away, pointing proudly at a silver-colored economy-sized car (which incidentally did not even come with one of those musical door unlocking devices, which might have helped us locate it).  I walk toward him.

And with that mild disaster averted, I could get back to pretending the glamorous life.

"For my part, I travel not to go anywhere, but to go.”
View all posts by Traveler →
This entry was posted in Los Angeles. Bookmark the permalink.