I saw a few types of monkeys on this trip.  While in Zimbabwe, on the lawn of the Victoria Falls Hotel, I witnessed the sneaky mischief of some baboons who regularly and boldly visit the lawn of the hotel, right up to where the hotel guests have breakfast each morning.

Many guests saw these curious little fiends as great photo ops. The hotel workers did not take as welcoming an approach, however, instead shooing them away.  Locally, they are considered “friendly felons,” because of how they brazenly come up to the table, grab food from your plate and run off with it.

This did not happen to me, nor to any of the guests dining near me, but it was clear that these baboons felt pretty comfortable making appearances among humans. 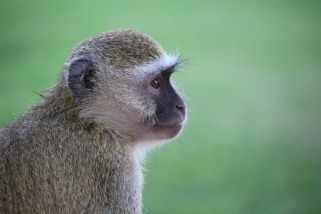 At Victoria Falls Hotel in Zimbabwe, there were many many vervet monkeys.  They were all over the lawn, often in pairs or groups.  As with the baboons, they were unafraid of a human presence.  They’re small, originally native to southern Africa, and mostly herbivores.  Not to mention, their faces are as adorable as a chubby toddler.

According to the Wikipedia entry on vervet monkeys, they have some striking similarities to humans, including, oddly enough, a potential for alcohol dependency.

Just as I didn’t witness any criminal behavior on the part of the baboons, I also didn’t see any suspiciously woozy or drunk behavior from the vervet monkeys.

Apparently these animals also exhibit anxiety — highly feasible in light of that especially vulnerable look on their faces, as if they are frozen in permanently fearful expressions.

ctured above were in Zimbabwe. I didn’t see any monkeys again until the Cape of Good Hope at the southern tip of South Africa.  On the drive back to Cape Town, the guide spotted a small family of baboons in the wild, including a baby (not pictured) that was climbing a tree by the side of the road.

Tales were told that baboons have been known to open the unlocked doors of parked cars and hop inside, so the driver was careful to keep moving right along.

"For my part, I travel not to go anywhere, but to go.”
View all posts by Traveler →
This entry was posted in Africa, Animals, May 2016, Safari, South Africa, Zimbabwe. Bookmark the permalink.