We’ve had a rough and cold and snowy winter on the east coast and some of the mid-Atlantic states.

It seems winter will not be going out like a lamb.

I’ve taken some shots and moving images of the experience and set it to a 1982 song by Alison Moyet and Yaz (Yazoo).  Here.

When you come across a place that is vibrant, delightfu

l, welcoming, inclusive, inspiring, laid-back, and best of all, free, it’s hard to pass up. At Randyland, there is art, design, furniture, poetry, and community.

There are places to sit and chat with friends.

There’s a large box to drop your worries into (“no refund’s” [sic] clearly stated).

Randyland speaks for itself. It turns frowns upside down and lightens dark moods.

Randyland is located on the north side of Pittsburgh, Pennsylvania. It is as bright and multi-colored as the entire city was at one time dark and ashen.

It is, in some ways the “anti-Pittsburgh,” or at least the opposite of the vision of the city’s legacy. Since 1995, however, Randyland has been home to an art museum lovingly tended by Randy Gilson.

The museum has its share of the strange and unusual (see picture collage below). Some of the pieces are culled and curated from the hardscrabble city that surrounds it, and are then turned into unquestionable works of beauty and art. 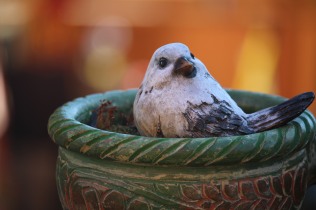 Randy Gilson (Randyland’s namesake creator), in making Randyland free and available and open to the public, has offered this labor of love to the city that sprouted him and his art.

If you find yourself with an afternoon on a nice day (it is outdoors), visit Randyland. When you enter, place your worries in the Worries Box.  When you leave, place a coin or a bill or a friendly note of thanks in the donation box.

What the Hell Am I Doing Here?

Shortly before Halloween 2017, I took a little bit of video in midtown Manhattan near Macy’s and Herald Square, right on the border of Koreatown.  It was a crowded rush-hour time of day on a Friday.

I set the short video to a Scala & Kolacny Brothers choral version of the Radiohead song “Creep.” These lyrics have layers of meaning, both personally (to me) and generally (to the images they accompany).

New York City’s crush of people and bustle of activity has a way of inspiring thoughts of wondering “what the hell” one is doing (assuming one stops long enough to consider it).  Then a couple of months after I took this video, I spent a day in the city with a visiting friend who repeated how “this city did not want” them here. It got me thinking.

Looking at anonymous faces in the crowd, one wonders if some of them are thinking “I wish I was special,” or maybe just what the hell they are doing here.

Perhaps the lyrics will have meaning to the reader as well.

Below are the lyrics to the song, in case a reader wishes to follow along.

On a narrow tree-lined street in Brooklyn, at a residential corner a block away from a main thoroughfare, is a building where famed American writer of horror fiction H.P. Lovecraft resided for a short time in the mid-1920s.  This was his second residence in Brooklyn, after a prior stay in East Flatbush.

On a recent bitter cold night in late December, I found my way over to the corner of Clinton and State Streets to take a look.

I lived in Brooklyn for close to a decade about a mile and a half from this nondescript, rather ordinary building.

Near the brightly-lit entry way were a row of overstuffed garbage bins and a bagged newspaper waiting to be retrieved by a resident.  There was no indication that the building once housed a famous resident more than ninety years ago:  No markers, nothing drawing attention to that fact. The more I learn about Lovecraft the man, particularly the man who spent time in the New York City of the 1920s, the more I think that would suit him fine.

Reading accounts of Lovecraft, he does not come across as a likeable or appealing character.  Ultimately, his xenophobic views and dislike of immigrants (of which there were many in New York generally and specifically Brooklyn) drove him away not long after, to a state much more agreeable to him.  Ultimately, he became more strongly associated with Rhode Island.

Here, in a passage from the Lovecraft story “The Horror at Red Hook” is a description that might as well draw upon his stay at this residence.

“Red Hook is a maze of hybrid squalor near the ancient waterfront opposite Governor’s Island, with dirty highways climbing the hill from the wharves to that higher ground where the decayed lengths of Clinton and Court Streets lead off toward the Borough Hall. Its houses are mostly of brick, dating from the first quarter to the middle of the nineteenth century, and some of the obscurer alleys and byways have that alluring antique flavour which conventional reading leads us to call “Dickensian”. The population is a hopeless tangle and enigma; Syrian, Spanish, Italian, and Negro elements impinging upon one another, and fragments of Scandinavian and American belts lying not far distant. It is a babel of sound and filth, and sends out strange cries to answer the lapping of oily waves at its grimy piers and the monstrous organ litanies of the harbour whistles.”

Doesn’t sound like someone who was fond of the environment he described.

Many years after living here, Lovecraft wrote a story called The Thing on the Doorstep.

While there is no way to trace any connection to this particular doorstep, it’s fun to look at this photo and its stark contrasts of shadows and light, while reading a passage like this, from The Thing on the Doorstep, on a doorstep in Brooklyn, so close to the “daily paths” of so many:

“There are black zones of shadow close to our daily paths, and now and then some evil soul breaks a passage through. When that happens, the man who knows must strike before reckoning the consequences.” 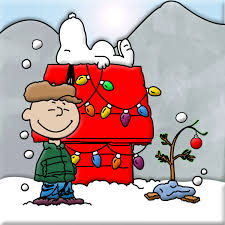 I’ve put together a couple of videos set to pretty holiday music and tossed them up on YouTube:

here (another visit to the World Trade Center at holiday time in its all white theme with a shock of blue set to a little bit of Heart).

Halloween is nearly upon us. Yet how far this intriguing holiday of lore has traversed from the Halloween of our pasts…

(apparently there was a time I was an angel, and there I am, looking somewhat numb, lost, and not at all imbued with angel powers, seated between my Devil brother and Witch sister, at the annual Halloween party held in our church basement.)

… to the commercialized, sexy-fied immersion it has become in the U.S. culture we have now.

By “culture,” of course, I mean in the biological sense, as in the “culture” growing in a petri dish used in high school science class.

There is nowhere better than my favorite place on the Internet to lay out the precise ways in which this beloved holiday of our youths has transformed since the 1970s.

Our main goal of the night, like everyone else’s, was to compete for who could snag the most sugary junk food. My thing was Reese’s Cups. My brother always came back at the end of the night with a pillowcase full of the best junk food. My other brother’s thing was hard candy. Of course, somebody always got an apple. I don’t know what happened to the apples.

Actually, I think that Angel costume lasted a few years in a row.  I also think that’s the year my parents retired a huge plastic sailor mask my brother liked, because it had been in the attic for so long that he got (warning: link contains disgusting images of the bacteria) thrush after trying it on.

I warned you about that link.

Here is a little Halloween video I made several years ago, using the Magisto app, made up of a compilation of fun scary things.

Oculus at the World Trade Center

I’ve been absent for a couple of months but will be posting again soon. Stay tuned.

In the meantime, a video:  The World Trade Center has been rebuilt (and continues to be), and it is now a massive transportation hub and shopping & dining center.

Here is a short video of the main area (known as “Oculus”) on a Saturday evening in October.

Addendum to last week’s post about the Morgan Library:  I’ve created a short video, now uploaded to the YouTube channel.

A voyage through time

Sounds like it could be a Gothic castle in the hinterlands of eastern Europe.

Instead, it’s the library of J.P. Morgan at 37th & Madison in New York City.

Yesterday, I visited the home of this impressive collection of rare books, manuscripts, and what the museum’s Wikipedia entry says was once known as “incunabula” — pamphlets and other printed materials printed before the year 1501 (the Gutenberg Bible is a well known example).

The library has three wings filled with books, manuscripts (including some original 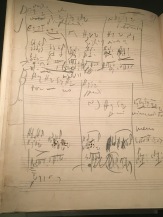 music manuscripts from notable composers like Puccini, seen here, at right), and some artifacts, all part of a massive collection by the banker and financier John Pierpont Morgan.

There are a lot of Holy Bibles, many many many Bibles — a Quaker Bible, a Gladstone Bible, Bibles spelled “Byble,” and Holy spelled “Holie,” some Bibles published in the 16th century — and a Koran and a Talmud.

I was there during a “free Friday” evening at the Morgan, which means there was a lot of visitor activity and hubbub surrounding these shelves and cages and glass cases, but none of this took away from the feeling of being enveloped by hundreds of years of published words in rich and beautiful bindings.

Accompanying this permanent collection was the museum’s current exhibit of paintings associated with the writer Henry James, including portraits of the writer, as well as a special exhibit on Henry David Thoreau and his famous journals.

Overall, well worth a visit, on a free Friday night or for the twenty dollar admission fee on any other day of the week.

About 18 years ago, I felt inspired to write a strange little essay about Sam Shepard.  I don’t recall now why I composed it or what I had planned to do with it, if anything.  Ultimately, I did nothing with it, aside from file it away in some online folder.

“Blame Sam Shepard for my love affair with tragedy.

His words affected me before his cowboy looks did.  It started when I was just 16, when I saw Buried Child at a public theater in Pennsylvania.

Much has been written about how his plays represent the disaffected, the isolated, America’s ignored and misbegotten products of an American dream.  How they capture the violence of rootless characters’ collective psyche, characters who hold on precariously to the promise of a way out.  There wasn’t and isn’t much I could add.  I do remember this:  That when the last line of Buried Child was read and the lights faded to black, a jolt of energy passed from the stage through the floor to my feet and all the way through me like an electric current.

And I didn’t even yet know the face behind the words. 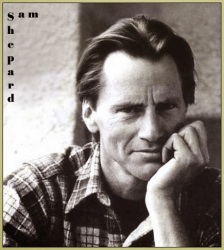 Sam Shepard once said, on finality and endings:  ”The temptation toward resolution … wrapping up the package, seems to me a terrible trap … The most authentic endings are the ones which are already evolving towards another beginning.”

As much as he left as a legacy, still how much more might he have left in our country’s current intellectual vacuum?